Coach: Just don’t call Jim Sullivan ‘the old man on the end of the bench’ 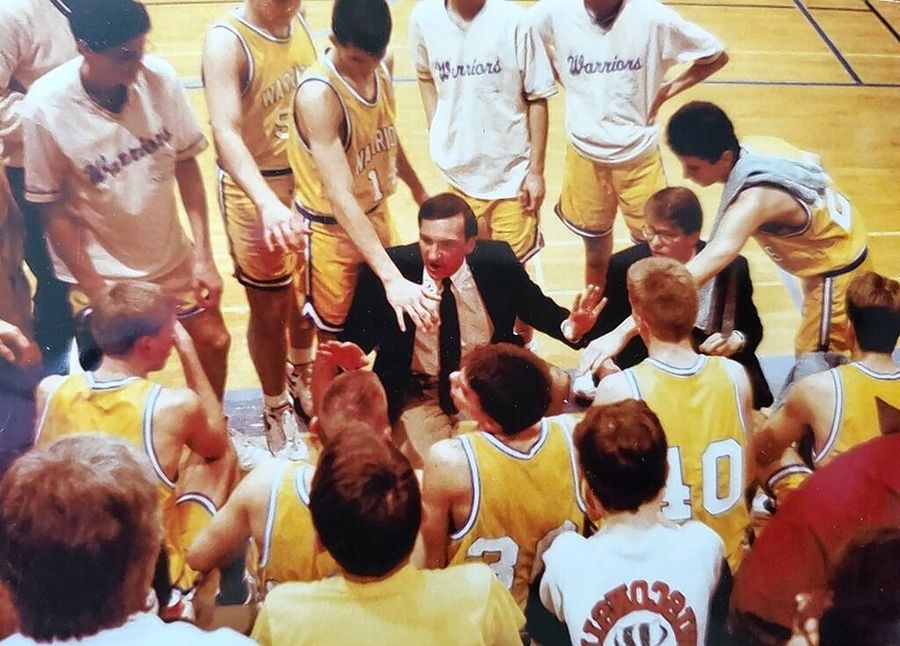 After coaching for many years at Maine West High School, where he had a tremendous eight-year run — the best in the school’s history — Jim Sullivan finally stepped away from coaching. Or so he thought. (Courtesy of Jim Sullivan

Coach Jim Sullivan has been there and done that in the Chicago suburban high school basketball scene for many years now, winning regional and sectional titles, getting a team downstate and being inducted into the Illinois High School Basketball Hall of Fame.

But just about every time he thinks maybe it’s time to step away and take some time off, something or somebody keeps calling him back.

His latest return to the high school hoops scene? With our very own Glenbrook North Spartans as the lead assistant to third-year head coach Quinn Hayes.

“Just to show you how old I am,” says Sullivan, “I used to coach against Quinn when he was in high school and played for St. Viator. He was a heck of player back then. We scouted all kinds of ways to stop him and he still put up 25 points on us with regularity.”

Better to be with him than coach against him, I guess. Sullivan joined the GBN staff 3 years ago, and now the two work closely together.

The seeds of their relationship were planted all along the way. Hayes kept in touch with Sullivan after high school, and when he finished his college playing career and started coaching, he would constantly tap Sullivan for advice and expertise.

It was just a matter of time before the two connected in a closer way.

“A few years ago, Quinn mentioned to me he may be taking on a new coaching job (Hayes at that point had been the longtime coach at his alma mater, St. Viator), and he asked would I be interested in joining?” Sullivan said.

“I had just left one coaching job and was thinking of taking some time off, but I was intrigued by this new challenge, and always respected Quinn and thought it would be fun to coach with him.”

Actually, the theme of “trying” to take some time away, but continually getting called back into coaching, kind of runs through Sullivan’s illustrious coaching career.

After coaching for many years at Maine West High School, where he had a tremendous eight-year run — the best in the school’s history — winning four regional titles, sectional titles, and bringing a star-studded team led by future college stars Lucas Johnson and Kevin Frey to a fourth-place state finish, Sullivan finally stepped away from coaching.

Or so he thought.

It wasn’t long after his first attempted “step away” before his phone was ringing. Schaumburg coach Bob Williams contacted him and asked him to join his staff, so Sully, who had taken a couple years off, decided to jump back in the game.

Good move. He was on the bench when that Schaumburg team made one of the great underdog runs in IHSA history, eventually winning the state championship over a powerful Thornwood team.

After that great run, Sullivan stepped away from coaching again, finally seeking time to get some rest. The time off was short-lived. When young coach Matt Walsh was named the new coach at Schaumburg, guess who received one of his first calls?

Back to coaching it was for Sullivan, and he had a good three-year run, a second time around, with the Saxons.

Now, finally time for a break? Nah. Nearby Hoffman Estates High School had just hired longtime Schaumburg assistant and good friend Luke Yanulle to be their head coach. Yanulle’s first contact to find an assistant? Bingo. Back to the coaching grind for Coach Sully, this time for the mighty Hawks.

“I thought going to Hoffman Estates would be an interesting challenge. New environment, new program, new coach, and I thought it would be nice to work with Luke in his first head coaching job. I really enjoyed it there, and working with Coach Yanulle was great.”

That lasted a solid seven years, finally ending when Yanulle decided to step down to spend more time with his ailing father.

So, at long last, the hall of fame coaching career was finally going to come to a close.

“That was the plan,” laughs Sullivan. “I was actually thinking of moving to Arizona and made a few contacts down there for potential jobs. I was kind of looking forward to it, but my father passed away and I made the decision to stay here and help out with my mom.”

If we haven’t learned the lesson by now, it is that if Coach Sullivan is not employed, and is anywhere in the general vicinity of a Chicagoland gymnasium, his phone will start to ring.

Sure enough, new Glenbrook North coach Quinn Hayes contacted his good friend and gave coach his best sales pitch … and off to the green and gold he went.

“I got some definite flak from my old Maine West players,” says Sully, laughing. “Back then our number one conference rival was Glenbrook North, so they couldn’t believe I was now going over to ‘the dark side’ to join their program.

“I told Coach Hayes when I took the job, I wanted to be actively involved. I didn’t want to just be the old guy on the end of the bench, and he has been great about it. He allows me to have a voice, both in practice and in games, and I feel like I have an impact with the team and the kids.”

This year, his third with the program, Sullivan runs the Spartan defense. I asked him what keeps bringing him back to the game of basketball? Especially since he was a baseball and hockey athlete while attending Niles North High School, circa 1976.

“I love the activity and the speed of the game most of all. The end-to-end action,” Sullivan said. “I have always been fascinated with the strategy and the chess match that goes on within the game. It was never my plan early in my career to get that heavily involved into basketball coaching, but I kind of just fell in love with the game along the way.”

So, after some 40 years coaching at various ranks, Sullivan will have a seat again this year on the Spartans hoops bench and — rest assured — it won’t be at the end of the bench. Coach Sullivan will be right next to head coach Hayes, and the two will work their coaching magic together.